Last Monday, August 21st, two historical events took place. My mother’s birthday and the total sun eclipse that crossed 14 states in the US–from coast to coast–driving people crazy. In my city, the only effect that the astronomical event brought was torrential rain that overcast the sky leaving millions of fanatics with their $40 special sunglasses unpacked.

Out of all the images that circled social media in the last couple of days, the one that caught my attention was this Colombian cartoon by Matador, published on the newspaper El Tiempo. Corrupción means Corruption. 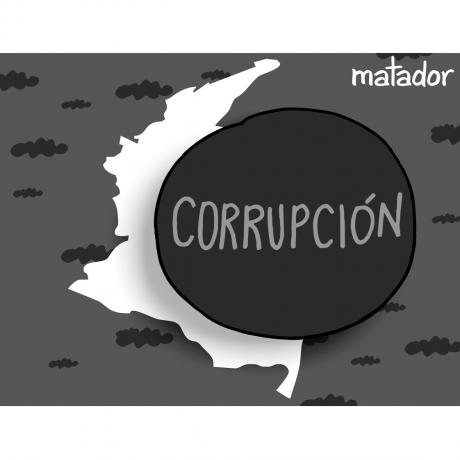 Then, I read the headline of the news article that was next to it on the website. It mentioned the latest DEA investigation about the out of control growth of coca crops in Colombia. According to the report, between 2013 and 2016, the number of acres went from 199,000 to 465,000; this is equivalent to a 134% increase.

The report also mentioned the samples collected by the agency’s Cocaine Signature Program which reveled that 92% of all cocaine confiscated in the United States comes from Colombia, 6% from Peru, and 2% fro other nations.

Nonetheless, the point that caught my attention was the one in reference to the purity of the export product. Between 2007 and 2016 the average of quality remained in levels of 73 and 83%. In other words, the purity of the Colombian cocaine is so high that the production potential guarantees it can be cut several times before hitting the streets of USA and Europe.

After I read this article I was brokenhearted. I have been away from my country 12 years and once again Colombia occupies the headlines next to the word cocaine. The negative image that we hardworking and honest Colombians have been fighting, inside and outside of the country, seems to be a tattoo impossible to erase, and what is worse, the responsibility is not only on the drug traffickers, but also on the degradation of the government.

A few weeks back I watched a video on Facebook of an elementary school in one of the war zones of the country. The structure barely stood, it had no walls, the roof was made of straw and the floors were the dirt. There was no chalk board and no desks or chairs.

Most likely the tax dollars that were assigned to the construction and endowment of the little school ended up lining the pockets of some corrupt public official. Thus, the children that should have been learning to read, write, and dream of a future full of possibilities, are probably now chopping trees and planting coca bushes.

I have heard for most of my life that Colombia does not progress because of the war with the guerrillas. I disagree. The mother of all afflictions in my country is the corruption.

As I have said before, Colombian’s topography is majestic. The fertility of its soil and the climatic conditions guarantee the production of the best varieties of products such as coffee, avocado, flowers, and else. Therefore, it is not surprise that the Colombian soil yields the best cocaine of the world.

However, the systematic neglect of rural areas by the Colombian Government for more than half a century, makes a farmer compare the benefits of planting good crops rather than the illicit ones. The answer is a rhetorical question.

What is the point of going to school and living an honest life? The forgotten men and women in Colombia don’t know there is a life beyond crime. They live in the darkness of an eternal eclipse named corruption, which in contrast with last Monday’s, is yet to clear the sky.