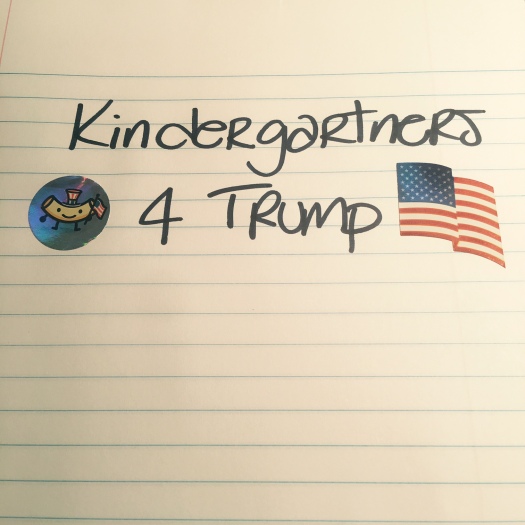 My son woke up this morning and sat at the kitchen table, yawning, with sleepy eyes. Then, while my husband made him breakfast, he told him that Donald Trump had won the election. His eyes opened wide and smiling he asked, “He really won?“

For several months after school, during our car ride home, he talked about what he and his friends said about Donald Trump becoming president of the United States. He is only five and a half years old, and clearly he doesn’t understand the meaning and ramifications of yesterday’s results. In spite of that, what he and his 15 kindergartner school mates got right, every pundit and pollster got wrong.

Just like I wrote in my October 5 column about the Colombian failed referendum, the Democrat machinery defied a snoozing lion. They labeled the Trump supporters as ignorant and racists since he launched his campaign last summer, and they continuously silenced their opinions with fictitious polls, profanity rap lyrics, and pop songs of celebrities who haven’t gone shopping for groceries or paid a mortgage in years.

This election proved how out of touch the political class in Washington is from the regular folks. They live in a bubble of bribery, private cars, and lavish dinners. Meanwhile, the vast majority of hard working Americans struggle to find a way out of poverty for their families. Many of them are on some type of government assistance, which they despise, because their parents–mostly immigrants–taught them to never take handouts.

“The forgotten” are simple and humble people. They have had their hands and hearts ready to work since thousands of manufacturing companies flee their cities. This is where Trump dug deep and connected with this segment of the population, and he deserves all the credit for it.

Although I voted for Trump, I didn’t board the train from the beginning. In fact, I voted for him to stop The Clinton’s corruption saga from claiming the White House again. However, during the last couple weeks, his message of “Give me a chance. What do you have to lose?” really resonated with me as I saw him outwork his opponent, party defectors, and the media.

As much as he changed history and the electoral map of the United States, I think the goodness and trust of his supporters changed him. Hopefully he understands that, his next sky scraper project is holding the lives of more than 300 million Americans up in the air.

As as Hispanic immigrant and naturalized citizen, I am very proud of the Latinos who voted for Trump. There are not exact numbers yet, but we were not just a few dissidents (25% aprox.) The Democrats assumed that they owned our vote, as they still see us as third class citizens, weak and needy. Nonetheless, they underestimated us once again just like the Republican nominee Mitt Romney did in 2012. Will they ever learn?

I can’t say if Donald Trump will be a good or a bad president. That I leave to God. For now, I am just going to enjoy being on the winning team with a feeling of victory and hope. There is still much to do to Make America Great Again, so let’s get to work.