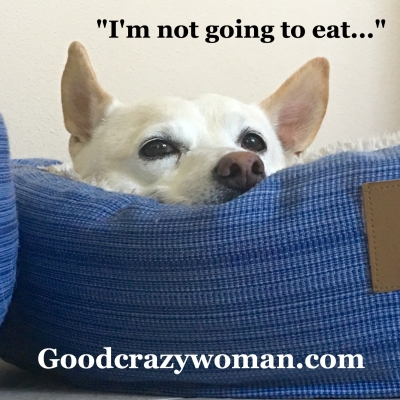 Last weekend, my son and I visited one of my best friends who lives in Orlando. When we walked through the door around 6 p.m. on Sunday, my fur babies–Rusty and Sasha–ran to the door jumping and kissing us as if we were a pair of beef lollipops. Immediately after, Rusty led the way to his feeding bowl trying to show me that something was missing.

Earlier, my dog sitter texted me to let me know that Rusty didn’t eat his breakfast, so he picked it up and put it on the kitchen counter, that way Sasha—the food vacuum—wouldn’t eat it. I knew exactly why Rusty did that: every time that I leave for more than one day, he starts a hunger strike to show his discontent.

I honestly envy his principles. If I followed his example when my husband travels for business, I could shed a few pounds. The problem is that I don’t give up a meal for anything in the world!

After I fed both pups, I knelt down and petted Rusty—pushing Sasha away because she just can’t stand watching her brother receive affection–and told him how much I loved him. I saw the streaks of the tears on his cheeks, but I also saw in his eyes the happiness and relief of knowing I had come back. He showed his love without hesitation or shame.

My human son acted in a similar way, but due to his Daddy’s absence. While we were in Orlando, my husband was in Tennessee at a golf tournament organized by a national road assistance company with whom he is trying to secure business.  During the four days that my husband was away, the little man acted-up constantly; he was moody and cranky when he wasn’t weeping and crying.

As much fun as he had playing with my girlfriend’s kids, he stopped several times after a belly laugh and came running to tell me, “I miss Daddy…” with watering eyes.

Contrary to my dog and my son, I adopted “the indifference” posture to show my husband that I wasn’t affected by his trip. I ignored a few of his phone calls and made no effort to share what we were doing, much less did I tell him that I missed him. Why?

While he was “working” having a blast doing what he likes the most–playing golf with a bunch of guys and free of rugrats–I was dealing with our son’s tantrums. I probably would have behaved differently if he had to spend four days confined in a cubicle buried under mountains of paperwork or doing laundry!

Nevertheless, when he got back later in the evening, I let him know how I felt–I am simply not build for the long cold-shoulder attitude–and confessed that I hung up his phone calls on purpose. As much as my hubby drives me crazy–same as I do to him and I love it!–we can’t live without each other’s laugh.

Life gives me wrinkles for free, so I a’m not going to add the ones from frowning too much. Besides, to fight you need at least two contenders.

After this weekend, I just wished I had followed Rusty’s honorable hunger strike to show my husband that I missed him. Instead, my girlfriend and I stuffed ourselves with cold cuts, French cheeses, chicken wings, chocolate, donuts, and tequila.

This post was sponsored by Zellner Insurance Agency. Many things in life don’t have insurance. For everything else, call Zellner (888) 208-8119